When I was 13 years old I was in my first band, called Eternity.  I was the lead singer and my best friend Kent wreaked havoc on the guitar, as we tore up Dream On by Aerosmith at the Junior High School talent show.  We had dry ice, and colored lights, and even a few flames we rigged with magician’s flash paper, and we looked Oh So Cool in our bell bottom pants, Saturday Night Fever silk shirts and patent leather shoes; it was 1978.  So when Kent called me this year and said he wanted to spend his 50th birthday back in Costa Rica, I knew I had to plan something special.  I have never been to the Caribbean side of Costa Rica, as it is very remote, and not necessarily the safest place as I have been told.  Potential Danger: perfect! Let’s see how much trouble we can get into.  Another good buddy of mine, David, just happened to be coming to Costa Rica for a visit the same weekend so I invited him along, and had them both fly into San Jose and I drove to pick them up. 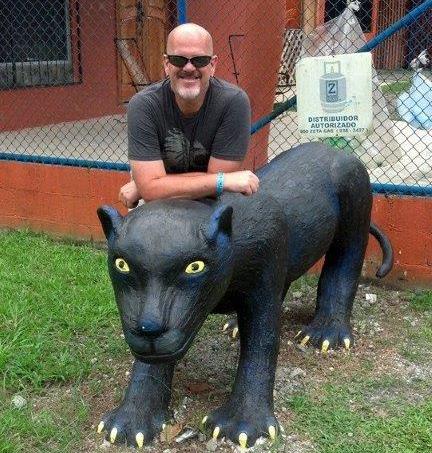 We left the city the next day at about 7 am and started our trek east.  There is only ONE Road heading out of San Jose to the port city of Limon, and it ranks as one of the most dangerous in Costa Rica.  It goes over the Braulio Carrillo National Park, and past some of the biggest mountains in the country.  The passengers get to enjoy flashes of the greatest scenery imaginable, from the highest volcano there is, to incredible gorge and canyon views; rolling hills and spectacular rivers; small Tico towns and wildlife; but not the driver.  I spent the entire first 90 minutes with my eyes glued to the road, white knuckles on the steering wheel, sweaty palms and fear in my eyes.  You see the road is basically a two lane suicide path, as it S-turns back and forth, never a straight away for more than a few hundred meters.  There is a cliff on one side, hundreds of feet down, and the sheer rock face on the other, with a culvert that is at least 6 feet wide and 4 feet deep made of concrete.

Buses and trucks are flying the other way, usually half in our lane, forcing my pick-up to ride the edge of the road, inches from death, while barreling down the highway; pushed to unsafe speeds by the crazy drivers behind me, that will risk their lives and pass you on a double yellow, just to save a couple of minutes in time.  It was like something out of Mr. Toad’s Wild Ride.  The city of Limon is the largest port of entry into Costa Rica, and just about every single item that we purchase and use, is brought there by ship on a container.  They load these metal monsters on the back of 18 wheelers who then have to navigate this one crazy road to get to the city.  Like most truck drivers, they get paid when they deliver, so time is of the essence, and the cars coming the other way have very little value, in their minds.  Trust me when I tell you, this is not a road you want to commute on every single day.  Having lived in Southern California for a decade, and drove some of the busiest freeways on the earth, I thought I was a pro, but nothing prepared me for this puppy.