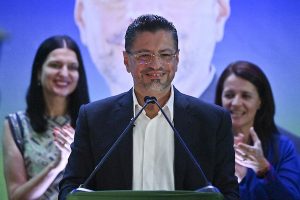 Chaves Robles was born in the metropolitan district of Carmen, in the central canton of San José, on 10 June 1961. He obtained a Ph.D. in Economics from Ohio State University. Before his appointment as minister, he worked as the World Bank country director for Indonesia and countries of America, Europe and Asia. In 1992, before completing his Ph.D., the Institute for International Development at Harvard University offered him a four-month fellowship to conduct field research on poverty, rural poverty, micro-enterprise, and medium enterprise in Indonesia. When he finished his doctorate, the World Bank offered him a job for the publication of his research.

The current president of Costa Rica, Carlos Alvarado Quesada, announced Chaves as the new Minister of Finance on 30 October 2019; however, it was not until 26 November of that year that he took office and indicated that his priorities would be to ensure compliance with fiscal laws, increase the collection of existing taxes, combat tax evasion and continue with the containment of public spending.

As part of his campaign, the Chaves-led Social Democratic Progress Party sought to combat corruption by punishing those who do not report acts of misconduct. Chaves stated he was in favor of transparency between the government and the press, universities and citizens, and that he planned to foster it through a daily report of the activities carried out by public institutions. His plan regarding unemployment involved encouraging more women to join the workforce and to raise the number of STEM graduates in response to the growing demand. He also supported bilingual education and promised to welcome foreign businesses to Costa Rica. To top off his campaign, he proposed a five-step plan to lower the cost of living. The five-step plan involved removing taxes from basic food and household items, lowering the price of rice, lowering the price of electricity, eliminating monopolies and supporting farmers to import more efficient agrochemicals. He also said that he did not support mandatory COVID-19 vaccination.

Reuters reported that Chaves had carved out an anti-establishment reputation. Rotsay Rosales, a political scientist and head of the National Policy Observatory of the University of Costa Rica, said, “Chaves has a liberal economic position, is socially conservative, pro-law and order and against the political class.”

Chaves will will become the 49th President of Costa Rica and take office on May 8th, 2022.