Hola! Welcome to Paradise. My name is Michael Simons, the Owner of Tres Amigos Realty, established in 2003, with offices in Playa Hermosa, Playas del Coco and Playa Panama.

The majority of people interested in buying real estate in Costa Rica tend to have many of the same questions so I took the time to answer them in detail here in a fun and informative way. This site contains a tremendous amount of information for you and allows me to express my views and pass along wisdom gained while living and doing business in the tropics. Hope you can join us. Pura Vida!

I will respond to your questions immediately with an email or personal phone call.

See you here in Paradise! 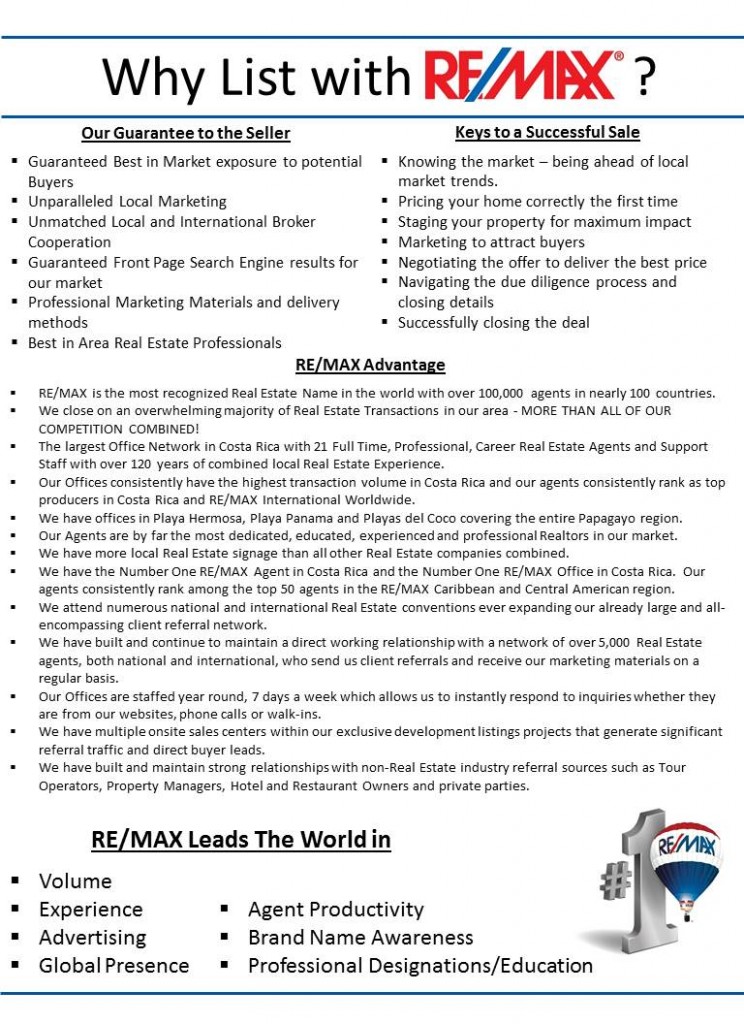 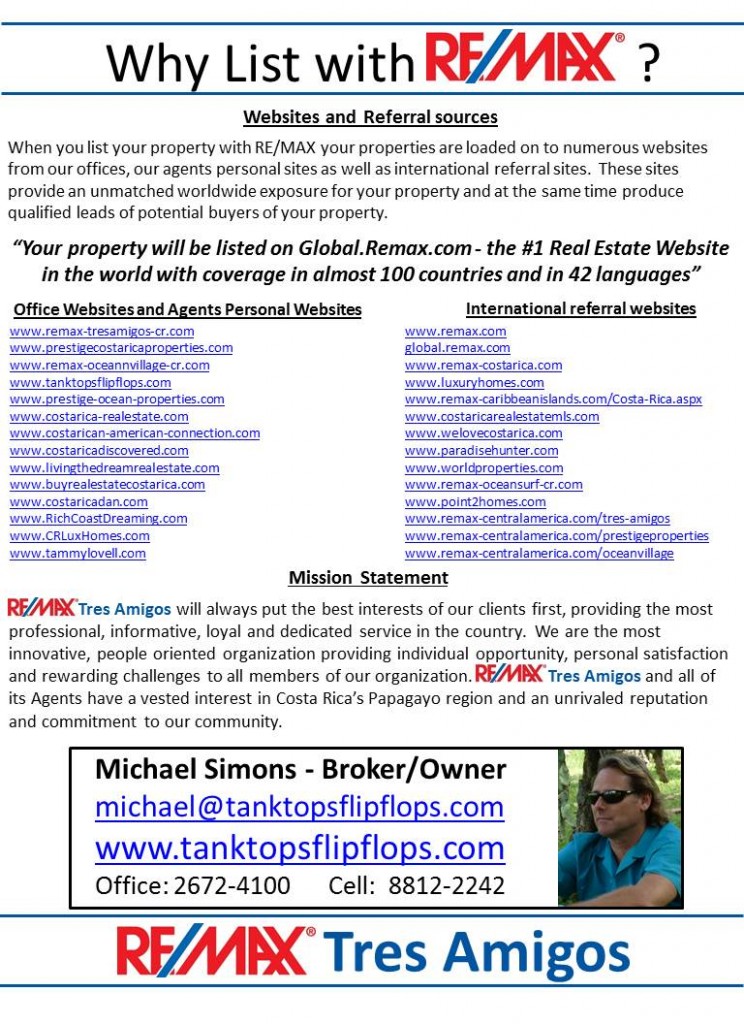 With a 4.6% growth in tourism in 2011, Costa Rica began to take steps towards the recovery of one of the sectors of national economy that was affected the most by the economic crisis. Therefore, the authorities and the tourism sector in general recently announced measures to promote the reactivation of the tourism industry over the next two years.

As announced by the President of the Republic Laura Chinchilla Miranda, the aim of these measures is to encourage the growth of the sector from a period going from 2011 to 2014 at a rate ranging from 4% to 5%.

Attracting new airlines and new routes is one of the strategies to catapult domestic tourism.[more…]

In a press conference in San Jose, the president explained that an intense policy to attract airlines for both traditional and emerging markets would continue, so that, by the end of 2012, an increase of a 10% to 15% in the number of seats may be achieved.

The recent announcement of the new operation of Copa to Liberia (see note: “Copa Flies to Liberia”) will open opportunities to attract tourists from the southern part of the continent. That is, from countries like Brazil, Argentina, and Chile.

According to the Costa Rican Chamber of Tourism (CANATUR), despite the growth in tourist arrivals from major tourism markets experienced in 2011, it is necessary to compete for the attraction of tourism within the regional market and in emerging outbound tourism countries such as Brazil, Russia, China, and India, due to their potential volume of travelers and money spent during their trips abroad.

The president of the chamber says that Costa Rica is a destination known for its nature and eco-tourism, which is the flagship of the country, but stressed that the diversity in tourism represents an opportunity to attract more visitors.

This year, the government has said it will open new flights from Monterrey and Mexico City. According to an open skies agreement that is pending in Congress, the number of flights from Mexico will increase.

During 2012, the government has set out to add new options for flights from Europe.

One of the biggest vulnerabilities of our tourism product evident after the recent crisis is our strong dependence on the U.S. market. As part of a strategy to expand and diversify markets for our destination, the country is actually exploring new horizons with booming economies such as China.

According to President Chinchilla, China’s growing tourism market is a focus of special interest for the promoting strategy that will take place in the coming years. For such purposes, a set of measures must be fostered. Among them are: reviewing the requirements and the process of issuing visas to Chinese citizens in order to allow the arrival of groups of tourists, implementing a memorandum of understanding on tourism between China and Costa Rica for Chinese and Costa Rican agencies to agree on promoting tourist visitation and on becoming facilitators of the process of visa application.

The government announced the development of a promotion program in China that would identify the target market of Chinese tourists and will give emphasis to groups with high purchasing power and to those traveling to the U.S., Canada, Europe, Japan, and South Korea.

Other action intended to attract the Chinese market is the establishment of contact between the Civil Aviation Authorities of China and Costa Rica to promote the direct relationship between airlines and a commercial aviation agreement between the two countries.

Representatives of the National Civil Aviation authority are preparing visits to China in May. The objective of such visits is promoting agreements that may facilitate the arrival of flights from the Asian giant.

The President of the Republic made emphasis on the fact that the policy meant to attract investment will continue and mentioned that the hotel infrastructure is one of the most important aspects within this strategy.

For the government, the strong policy of attracting investment translates into the construction of different resorts during 2012.

This amounts a direct investment of more than $325 million and accounts for more than 1700 rooms that are added to the 44.190 existing rooms across the country.

Hand in hand with new rooms, the government is interested in letting the business and corporate tourism grow, so it has proposed to develop infrastructure based on the needs of this sector with a National Convention Center.

Construction of the National Convention Center

No date has been confirmed yet; however. President Laura Chinchilla said that the construction of the National Convention Center will start in 2012.

The design of the building has already been awarded. The company responsible is just waiting for the Comptroller General’s Office to resolve the appeals issued against the process.

The Center requires an investment of about $30 million and a construction area of ??14 thousand square meters.

Parallel to the attraction of investments and the conquest of new markets, Chinchilla’s government has supported the work of the Costa Rica Board of Tourism (ICT) as to the granting of the Certificate of Sustainable Tourism (CST) to over 101 tourism businesses in 2011.

The goal is to end this government with more than 600 companies duly accredited.

Part of the work they have undertaken to promote tourism has allowed Costa Rica to be known in the American and Canadian market.

Based on information revealed, ICT has planned a close-to-$50 million investment in promotion and marketing activities from 2012 to 2014. There is a PR agency working for the U.S. market and ICT plans a similar contract for the European market as well.

The Minister of Tourism said that, before a world scenario full of challenges, the tourism industry must continue coping with challenges innovatively and promote the development of new market niches such as rural community tourism, medical tourism, cultural tourism and congress and convention tourism, which will strengthen the construction of the National Convention and Exhibition Center.

“We will continue working hard to raise the average stay of visitors to Costa Rica as much as possible, so that tourism may continue to generate significant benefits to the entire value chain,” said Allan Flores, Minister of Tourism.