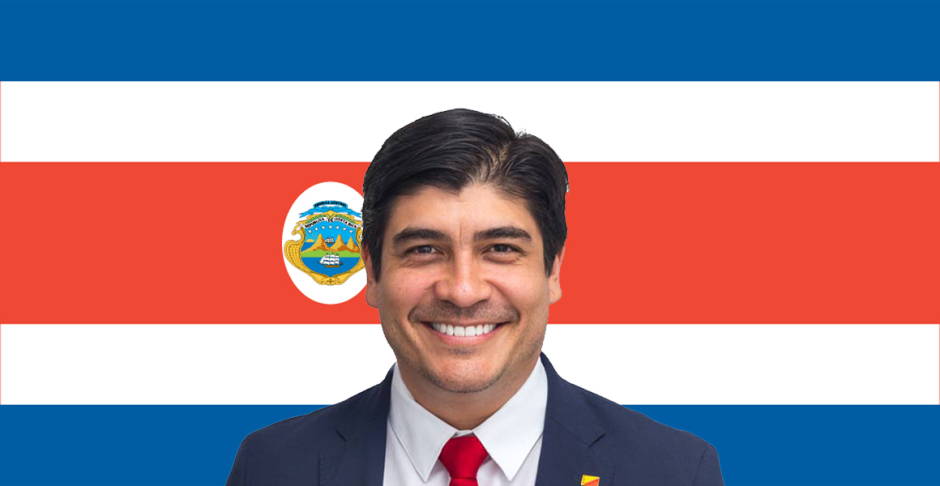 He was the second of three sons in a middle class family; his father is an electrical engineer and his mother was a homemaker. His older brother, Federico, is an engineer and his younger sister, Irene, an economist.

After studying at the private Saint Francis School, he studied journalism at the University of Costa Rica (UCR) and writing for the university publication and the weekly Ojo. He also became the singer of the progressive rock band Dramátika.

He told the TV network Teletica that he ultimately decided to leave journalism behind when he interviewed a woman in a poor neighborhood, whose son, who had psychological problems, had been killed.

“I remember that woman crying with such impotence, and I understood that moment of inequality, of injustice. I was going to share it with many people, but I could not change that inequality. That was my separation from the life of a journalist, because I understood that you have to get involved to change things,” he said. That’s when he got involved in Costa Rica politics.

‘A change for his party’

He changed his focus, studying political science at the UCR and later obtaining a Chevening Scholarship that enabled him to get a Master’s in Development Studies in the University of Sussex, England.

Returning to Costa Rica, he married the architect Claudia Dobles, his high-school sweetheart. Because of her work, they moved to Panama. (The couple now has a son, Gabriel.)

It was in Panama that Carlos wrote what he considers his best novel, “Las Posesiones” (“The Possessions”), a historical account of the confiscation of German and Italian properties in Costa Rica during World War II.

He came back to Costa Rica to work as the communications coordinator of the 2014 campaign of now-President Luis Guillermo Solís. When Solís won, he named Alvarado as the Minister of Human Development, a position focused on support of Costa Rica’s poorest populations.

UCR researcher Carlos Sandoval remembers that when the Solís Administration began, he spoke with Alvarado about the need for a new a school in the community of La Carpio, on the west side of the capital, where Nicaraguan migrants live with poor Costa Ricans.

Sandoval told AFP that the community had been clamoring for adequate educational infrastructure for 20 years, but that Alvarado got the project started in earnest.

La Carpio’s school, one of the most modern in San José, was inaugurated this year.

n 2016, President Solís asked Alvarado to take over the Labor Ministry, where he stood out for reducing privileges in the public sector’s collective conventions.

As the candidate for the PAC, he had to deal with the wear and tear on the current administration, whose image was hard hit by a corruption scandal as well as by increasing violence.

However, some analysts pointed to actions he had taken while in office as a Cabinet minister that helped him later distance himself from problematic aspects of the Solís administration.

“Carlos managed to keep his independence from the government with early actions such as asking for the resignations [of those involved in the scandal] and demanding more forcefulness from the president. Besides that, he’s a young figure, a change for his party,” Gustavo Araya, from the Latin American Faculty of Social Sciences (FLACSO), told AFP.

Throughout most of the campaign, the PAC struggled to gain traction in rural areas where poverty prevails, even though that issue was a focus for Alvarado as Minister of Social Development at a time when poverty decreased from 22.4 percent to 20 percent.

“The fight against poverty was not thought of as a client project. That’s why it didn’t generate an important mass that supports the government in the periphery of the country,” Araya said.