In honor of Children’s Day in Costa Rica 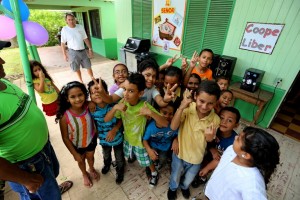 – September 9, 2013 – We decided to BBQ Burgers for all the kids at one of our favorite local Public Schools in Libertad, Guanacaste, Costa Rica.

OH MY GOD these kids are growing fast!!! Not to mention they are super happy and overly cute and they all were practicing their English speaking skill on us.

We could have BBQ’s 500 burgers and they would have eaten every single one but 72 Burgers, 8 Huge Bags of Potato Chips and 24 liters of Soda Pop was enough to fill them up for a few hours. 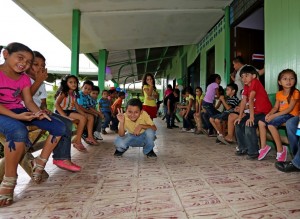 These kids were more than happy and then the teachers brought out a huge cake and each kid received a bag of treats and candies along with a bunch of school supplies.

We left just as the kids were hitting the high gear of their BBQ Burger and Cake high.  We escaped just in time!

The literacy rate in Costa Rica is 94.9%, the highest in Central America.  When the army was abolished in 1949, it was said that the “army would be replaced with an army of teachers.”

Costa Rica education spending beats the entire American Continent by a long shot.  The government spends 22.4% of its total budget on education.  The United States spends just 17.1% on education, Nicaragua 15%, Canada 12.7% and Panama a mere 7.7%.

Elementary and High Schools are found throughout 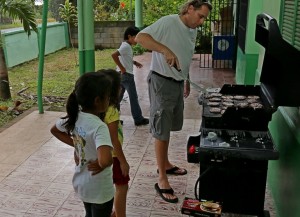 the country in practically every community. Universal public education is guaranteed in the constitution. Primary education is obligatory, and both preschool and high school are free. There are only a few schools in Costa Rica that go beyond the 12th grade.  Students who finish 11th grade receive a Costa Rican Bachillerato Diploma accredited by the Costa Rican Ministry of Education.

In 1869, Costa Rica became one of the first countries in the world to make education both free and obligatory. 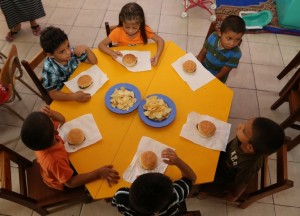 Costa Rica has continued throughout the twentieth century to make education a priority and especially in the last 20 years. President Figueres (elected in 1994) has promoted a computer in each of Costa Rica’s 4000+ schools and has made English obligatory in the curriculum.

Elementary school is divided in 6 year grades and kindergarten. Basics such as mathematics, language (Spanish and English), science, social studies, religion and physical education are covered in elementary school. Students are required to pass tests to move to the next level.

For Students who maintain good grades but do not have the economic means to buy school materials, uniforms, transportation, etc. the government gives out thousands of grants yearly to ensure that as many disadvantaged kids have 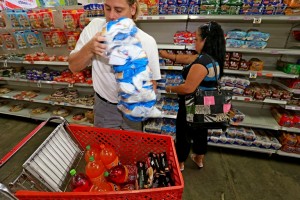 the opportunity to study.

There are private schools in Costa Rica.  Students attending the private schools have much the same curriculum as public school students but also have the chance to take SAT exams and can also receive the IB diploma through special studies in their Junior and Senior years.

There are also several private universities in Costa Rica whose numbers are increasing rapidly due to the difficulty of getting into a state- funded university. 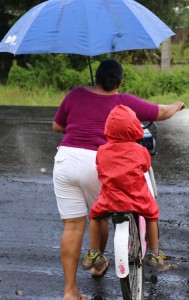 The Public University of Costa Rica (UCR) is the largest and oldest university and over 35,000 students attend this university – mostly all on scholarships. But even if no scholarship is available to the student, the tuition is only about $200 USD a semester. The main campus is in San Pedro, but there are regional campuses in Alajuela, Turrialba, Puntarenas, and Cartago.

Libraries offer adults a way to continue their education beyond sixth grade. Costa Rica has over 100 libraries spread throughout the country.